The North Carolina Museum of Art

Don’t underestimate local, county or state art museums. They may offer some astounding surprises, meriting inclusion on any art lover’s destination list. A case in point is the North Carolina Museum of Art (NCMA) in Raleigh.  Long known by art world professionals for its stellar collection of Renaissance and Baroque paintings, the museum remains obscure to the general public.  The result is missing out on splendid artwork.

The museum originated in 1947 with an unprecedented state legislature appropriation of $1 million for the sole purpose of forming a public art collection.  The allocation provided funds for an initial acquisition of 139 European and American works of art.   In 1960, these holdings were significantly enriched with the Samuel H. Kress Foundation gift of 69 paintings and 2 sculptures mainly from the Italian Renaissance and Baroque periods.  With the exclusion of the works donated to the National Gallery of Art in Washington, DC, the NCMA bequest was the largest and most important ever given by the Kress Foundation to any of the nation’s museums*.   It effectively put the NCMA in the "big league" of  museum collections.

The Kress works include the well-known. Giotto, Veronese, Tintoretto, and Titian are present.  The Giotto is the only altarpiece by the artist outside of Italy.  There are also those less familiar such as Giovanni Antonio Boltraffio or Massimo Stanzione.   All are represented by paintings of distinction.  Each has compelling qualities which hold the viewer's attention and reward observation.  The figures of St. John and Christ in Veronese's Baptism of Christ move as if in some other-worldly ballet.  In Stanzione's Assumption of the Virgin, the upward gazing Virgin with outstretched arms soars into the sky.  Securely held aloft by an interlocked circle of muscular putti, she appears oblivious to her height.

The multitude of figures in Tintoretto's Raising of Lazarus overwhelms**.  Lazarus, supine, raises one arm towards the giver of life with whom he is engaged in a silent communion. 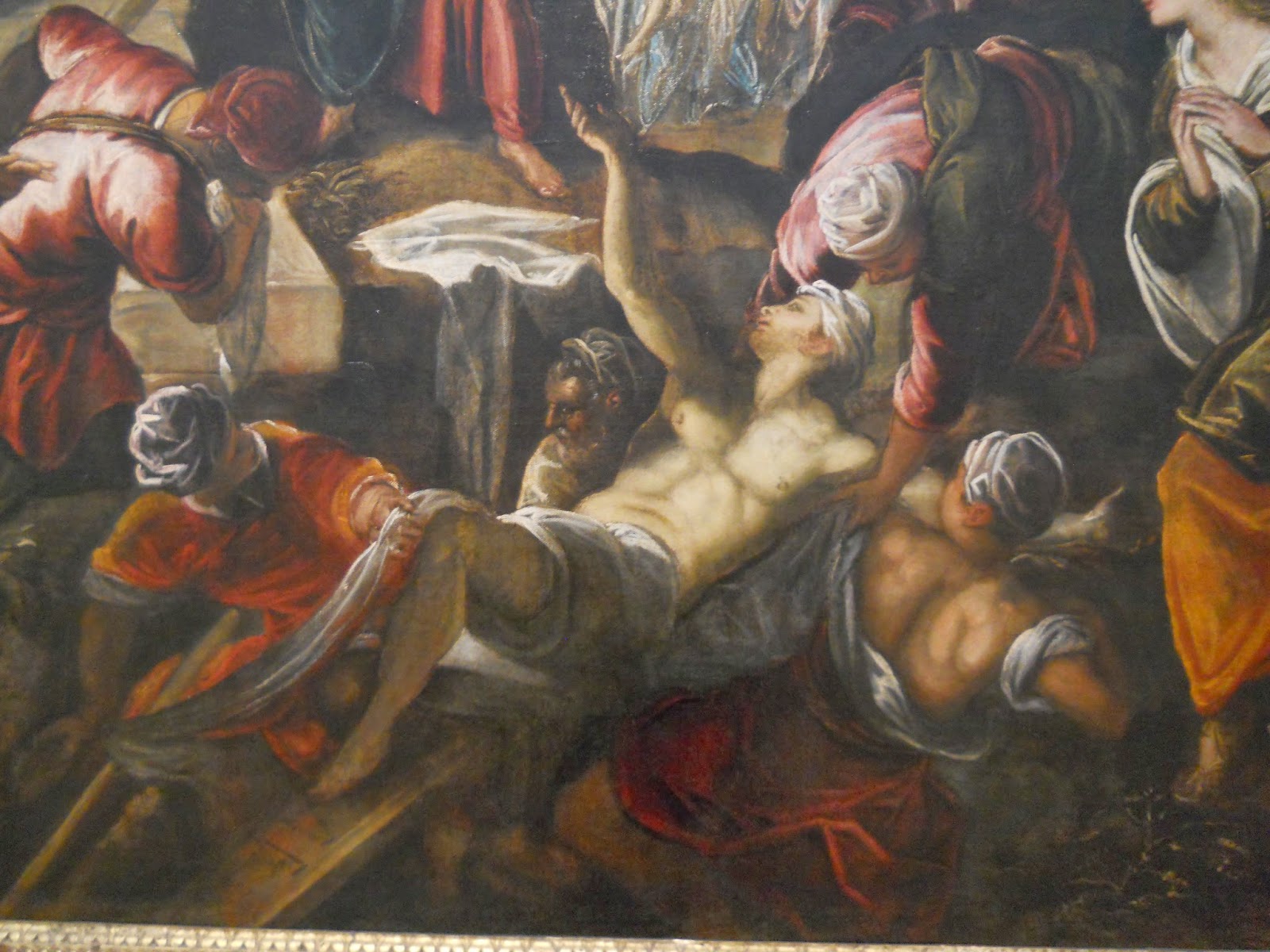 In the 1950s, the museum acquired some impressive acquisitions. Using state funds presciently, NCMA bought seventeenth-century and eighteen-century paintings. These included paintings by Bernardo Strozzi, Canaletto, Bernardo Bellotto, Peter Paul Rubens, Jacob Jordaens and Jan Lievens.  At the time of purchase, such works were not highly valued.  Today they are among the highlights of the museum's holdings.

One digression:  I have heard the remark, "I do not like religious painting."  Subsequently, a wealth of visual and intellectual joys are passed over.  For those so inclined, I urge looking beyond the religiosity.  Think of biblical scenes as stories and the different possibilities of representing the same tale.  Ask yourself, "What is going on?"  What feelings does the work elicit?  What ideas come to mind? Look upon the Madonna (Virgin) and Child (Christ)  imagery as depictions of a mother and child.  Consider the variety of ways the subject may be portrayed.  A comparison might be a popular tune interpreted by singers in their own distinct manner.  One might prefer a particular rendition over another but the melody remains the same.

Take a look at Peter Paul Rubens's The Holy Family with St. Anne.  A loving scene of a child asleep on his mother's lap.  His maternal grandmother seated alongside the pair.  Her left arm draped about her daughter's shoulder.  The three generations are compositionally contained within a triangular form.  This serves to further their connectedness as well as  to separate them from the painting's sole male figure.  He looks at the ancestral trio from behind a parapet.  So isolated, his relationship to the main group is questioned.  He is part of them yet apart.  Thus, without the theological explanations which are surely the artist's intent, the work enthralls.

Having said that, the NCMA has many works of a non-religous nature. The collection covers a wide range of artifacts from ancient Greece through contemporary works.  Of special note is American paintings with three works by John Singleton Copley.

*The Kress Foundation has distributed over 3,000 artworks from the Kress Collection to academic and regional museums in the United States.  Their excellent Web site, www.kressfoundation.org, allows viewers to look through the collection by map, repository or artist.


**Tintoretto's painting shows the strong influence of Titian's Martyrdom of Saint Lawrence.  Titian completed two versions of the painting one in 1558 for the Church of I Gesuiti, Venice and another in 1567 for the Monasterio de San Lorenzo, El Escorial, Madrid. Tintoretto's Lazarus appears to be variation of Titian's figures of St. Lawrence in reverse as if inspired by prints of the Titian works.  Prints render the original image designed on the printing plate in the opposite position.  Furthermore, the dark setting, crowd and turmoil of Tintoretto's Raising of Lazarus also link it to Titian's canvases. 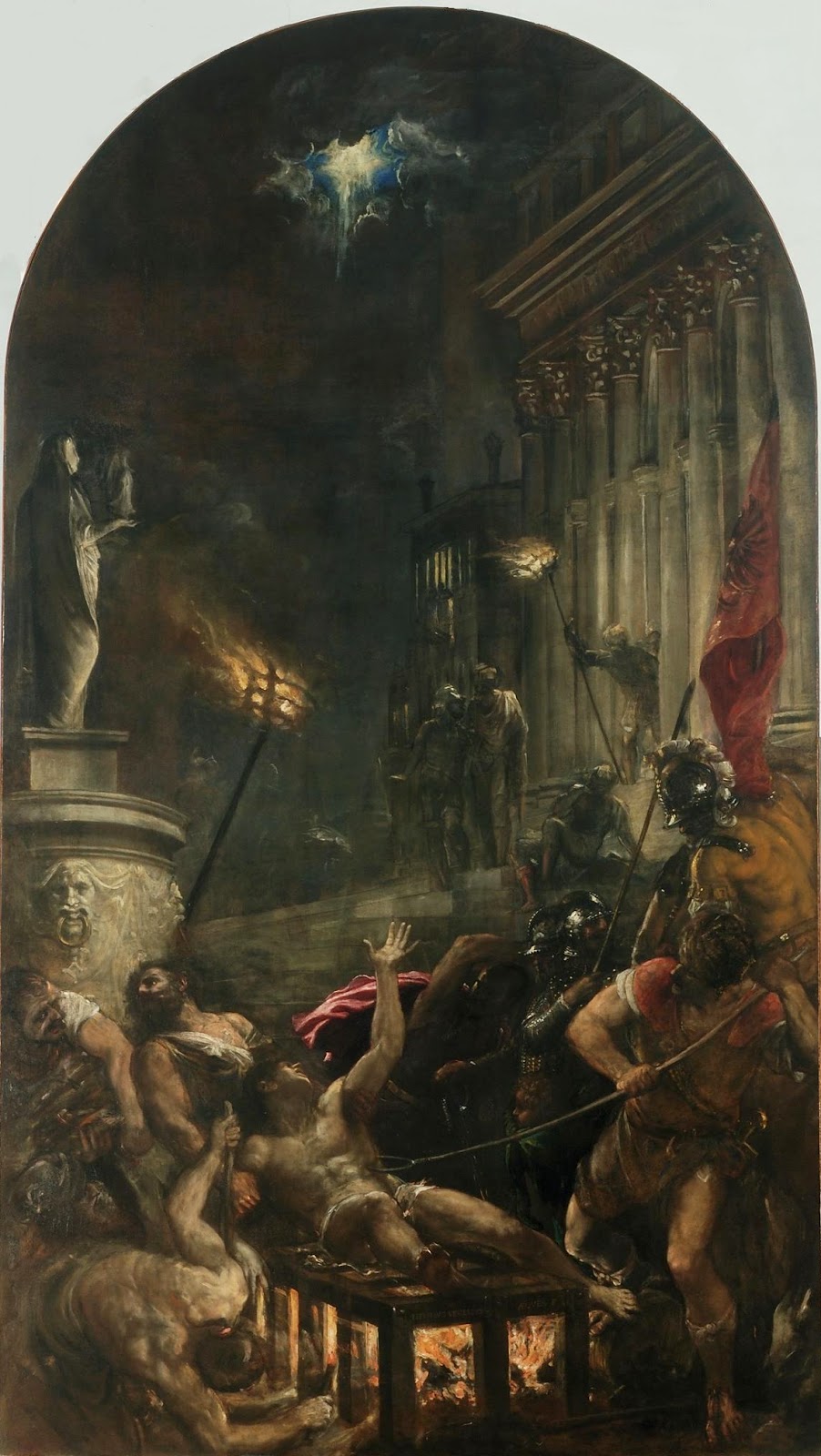 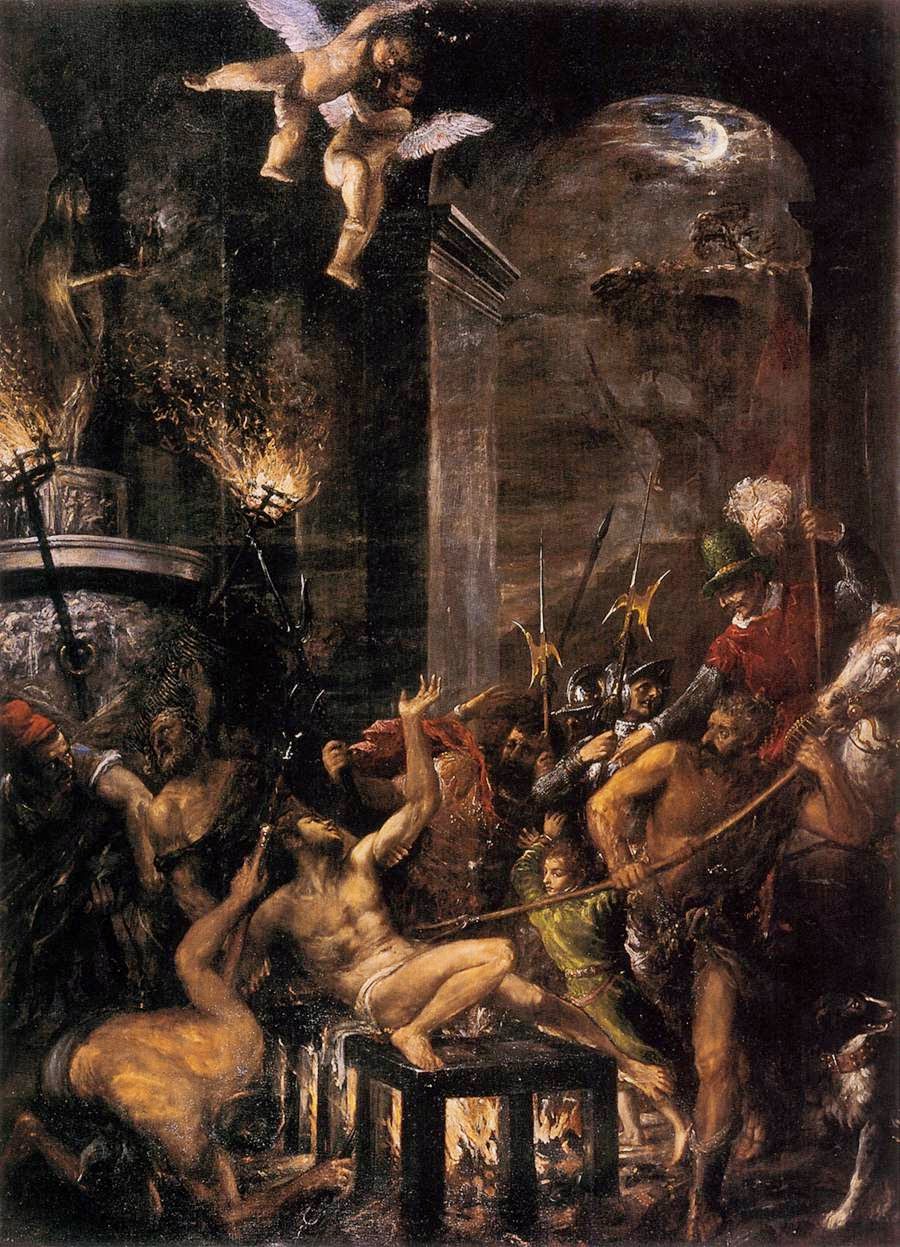 Disorder and confusion which surround  momentous happenings such as resurrection or martyrdom, bring to mind critical real-life events. Recall the photographs from the Robert F. Kennedy assassination.  An acknowledgement to Robert Schwarz for pointing this out. Valuable info. Lucky me I discovered your web site by chance, and I am stunned why this accident did not
came about earlier! I bookmarked it.