A Focus On Design and Craftsmanship

Norway and the Decorative Arts 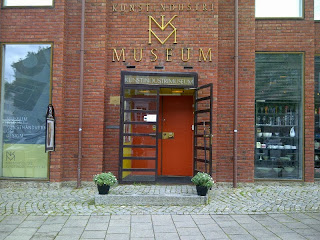 No other region is associated with craftsmanship and modern/contemporary design as much as Scandinavia. Denmark, Norway, Sweden and Finland boast top design firms. They manufacture goods characterized by simplicity, functionality and creative use of natural as well as innovative materials. Useful everyday objects turn into works of modern art. Ikea, Electrolux, Bang & Olufsen, Marimekko, George Jensen, Snohetta and Acne Studios are just some of the companies renowned for these skillful products. How did this come about? Why is one area so distinguished? The definitive answer is beyond this writer. A suggestion, however, may be postulated. Perhaps, these countries much more than others, used resources to support crafts as well as educate, influence and develop public taste toward an acuity for design. Good design became imprinted into the minds of the populace. What happened in Norway and the evolution of one applied arts museum will serve as an example.

Norway became a wealthy country in the nineteenth century. Industrialization, textile manufacture, shipping, export trade in such goods as timber and fish bought economic prosperity. By 1870, Norway’s GNP per capita was well above the European average. The country’s first rail and telegraph lines opened in the mid-1850s. In 1877, coast-to-coast trains made eased travel between Oslo, the country’s capital and Trondheim, its third largest city. Rail linked Oslo to Bergen, the second largest city, in 1909.  Norway inaugurated a constitution in 1814. Parliamentary sessions began meeting regularly from the late 1860s. The country achieved independence from Sweden until 1905. Norwegian nationalism flourished. The West, however, was still looked at for cultural leadership.  Radical aesthetic changes were taking place in England, France, Holland and Germany.

In 1851, London’s Great Exhibition of the Works of Industry of all Nations, also known as the Crystal Palace Exhibition, ushered in a century of popular world fairs.  These showcased the most advanced modern goods, objects and inventions. Paris’ Exposition Universelles followed in 1855, 1867, 1889 and 1900. Philadelphia hosted the first American international exposition in 1876. The hugely successful 1893 Chicago World Columbian Exposition was seen by over 27 million people.

The nineteenth century also saw the rise of great public art museums seeking the comprehensive collecting of painting, sculpture and historical artifacts. Notably, few acquired decorative arts. Such objects were left to applied art museums. These institutions evolved in a desire to encourage industry and public awareness after London’s Great Exhibition of 1851. London’s Victoria and Albert Museum was established in 1852; Paris’ Musée des Arts Décoratifs was founded 1905; and, the United States’ Cooper-Hewitt, National Design Museum was started in 1896.

The museum’s collecting pattern can be traced back to Jens Thiis who became director in 1895. He took charge of a museum with only a few hundred donated objects. Thiis, just 25 years old, was an art historian with innovative ideas. He wanted to collect the most advanced examples of contemporary design. To do this, he traveled widely in Western Europe. At first, he bought works in the international Arts and Crafts style but after attending the Paris’ Exposition Universalle in 1900, he focused on Art Nouveau.

He commissioned the Belgian architect, painter and designer Henry van de Velde to create a room and furnishings in the museum specifically for displays. What he completed in 1907/1908 is a unique room.  It is one of the few remaining van de Velde rooms in existence. It has been recreated in the present museum where you can also see turn-of-the century artworks such as three prints by Edvard Munch that Thiis had acquired in 1902.

Thiis' exhibition techniques were as pioneering as his purchases. Soon the museum was recognized as one of the most advanced museums in Northern Europe.   Contemporary applied art filled a whole floor. One room was dedicated to French designs, another to works from England with walls covered with modern wallpaper and curtain fabric by William Morris.

Thiis wanted to illustrate how contemporary artists were influenced by Japan’s arts and crafts.  Consequently, a collection of Japanese Art began.  Two framed Japanese prints in the van de Velde room are samples of Thiis' buying activities. At present, the museum houses the only permanent Japanese Art exhibition in Norway with objects dating from the prehistoric Jomon period through the Edo era and beyond.

Most of Thiis' planned museum workshops for a variety of crafts such as wood- and metalworking never were started. One, however, did open in 1898: a successful weaving studio and school which lasted nineteen years.

In 1908 Thiis left Trondheim to become director of the Oslo’s National Gallery.** He was succeeded by Hans Dedekam in 1909. Dedekamly primarily purchased older objects and Norwegian folk art. Dedekam felt it was an education necessary to make the public aware of their cultural history. He wanted to arouse people's "sense of beauty." Local craftsmanship were encouraged and given temporary exhibitions. Dedekam had been recruited from Oslo’s Museum of Decorative Arts and Design.  In 1919 he returned there as director.

Fredrik B. Wallen took over from Dedekam in 1920.  He remained director for twenty-five years. Wallen increased the museum's holdings in textiles, ceramics, glass, silver, enamel and tapestries. Craftspersons became actively involved with the museum. A glass-painting school started in 1935. During the War years, acquisitions were put on hold and the collection removed for safety.

In 1946, Thorvald Krohn-Hansen became director and, like Thiis, wholeheartedly bought modern art and design. His special preference was for Scandinavian designs. In 1951, he engaged the Danish architect Finn Juhl to design a museum room to house the best selections of contemporary Scandinavian furnishings and crafts. The result was “Interior -52” still on view today.  To make room for new displays, the museum's folk art was sent to the Trøndelag Folk Museum.  Collected tapestries were kept.

Jan-Lauritz Opstad became director in 1980. His particular interest is experimental contemporary crafts - objects that pushes the definition of what we call crafts. Opstad’s acquisitions have a distinct international profile and include pottery, furniture, printed fabrics, fiber-art, glass, costumes and modern jewelry. The latter is especially prominent. He has reached out to practicing artisans and promoted research in modern Norwegian crafts.

In 1990, the museum’s buying power increased substantially when the government set up a National Fund for the acquisition of Norwegian Contemporary Crafts. This enabled the museum to devote most of its own resources to the purchase of international works.

This past August, I had the privilege of spending several hours with Jan-Lauritz Opstad at the museum. As we walked through the galleries, he told me anecdotes about some pieces. Opstad explained that the museum acquired the majority of its holdings soon after they were made. Prices for acquisitions were usually not that high yet. He pointed out that the museum’s small size set limits on what could be displayed. Only about 2.5% of the museum's collection, approximately 1,000 objects, are on view. 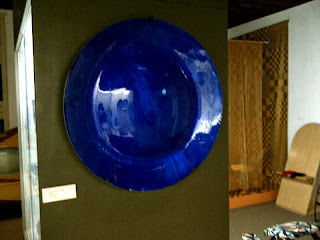 I thought I would put him on the spot when I asked if he had one favorite work. He thought a few seconds and took me to see a blue enamel silver plate by Grete Prytz Kittelsen, the distinguished Norwegian enamel artist, designer and goldsmith. Its highly reflective surface and form made me think of some of Anish Kapoor’s sculptures. Looking closely at the plate, I discerned a multitude of engraved lines. The design added a sense of depth and variety to the vibrant blue hue. Opstad explained that the artist achieved this effect by using a dentist drill while moving her outstretched arm back and forth. He told me her reach determined the size of the plate. The piece, 27 1/2 inches (70 cm) in diameter, was too big to fire in the artist’s kiln. Kittelsen had to send it out to a manufacturer of bathroom items that had a kiln big enough to fire enamel onto tubs! 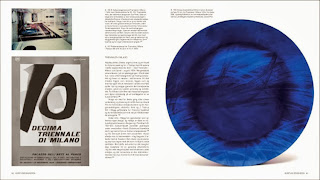 The artist won Grand Prize in the 1954 Milan Triennial Exhibition of Decorative Arts for her enamel collection which included this plate. It was one of Opstad's acquisitions. The director’s selection did not seem surprising after I found out that his Ph.d. thesis topic was medieval Norwegian enamels.

Nearby was a gallery called “Director’s Room”.  As the title suggests, Opstad was responsible for every purchase. It was filled with contemporary jewelry, decorative platters and sculpture-like objects which ranged in date from the 1980s to the early 21st century. The use of ceramic, glass, fiber and metal was often unconventional. American, Danish, Dutch, Spanish, French, Italian and Finnish artists were represented. Like a proud father remembering things about his children, Opstad could recall everything about each piece from its inception, to what the artist had to say about it and how it was made.

A new museum director began September 1.  For the first time in the museum’s history, a woman who is a craftsperson - jewelry designer - will be in charge. All past directors were art historians and male. After 33 years at the helm, Opstad looks forward to his next challenge. He will be cataloging the museum’s vast holdings. A task that is long overdue.

Some caveats concerning a visit to the museum: Staffing restrictions have led to inconsistent labeling of objects. Texts are in Norwegian. English translations are infrequent. At times, non-speaking Norwegians may find it impossible to decipher what a work is. This is especially true for the earlier objects although these do not make up the bulk of the holdings. One tall wooden table will serve as an illustration. The piece, to me, looked like a printing press. A tall turning apparatus appeared to be a press screw that could push an attached square piece of wood down tightly on the object's top surface. I tried to interpret the Norwegian label.  Dates “1650-1700” were clear but the only words I could make sense of were “presse”, “Holland”.  I assumed it was a decorative printing press.  Wrong.  I asked Ostad about it.  He told me it was a linen press which imprinted patterns into linen.

Identification, however, is not necessary for appreciation. Museum visitors can still appreciate workmanship and beauty in objects with unknown purposes.

I return to my original hypothesis. Could the efforts of Norway’s design museums, repeated in cities across Scandinavia, have engendered a general populace innately attuned to good design? Could these institutions have affected a cultural proclivity for well-made goods?

Think of it this way: Consider the comprehensive collections of New York’s Metropolitan Museum of Art (1870), the Museum of Fine Arts, Boston (founded 1870, opened 1876), the Art Institute of Chicago (1879) and the oldest public art museum in the United States, Hartford, Connecticut’s Wadsworth Atheneum Museum of Art (1842). What if, concurrently, New York, Boston, Chicago and Hartford decided to establish museums strictly devoted to decorative arts? Would the sensitivities of the American public have changed? When you think of good design, would you think of the U.S.?

Take what you will from this writer's above rumination. Hopefully, your thoughts will turn to change, innovation and how to go about transforming a culture.

*Consolidated in 2006 with four other museums to form one museum entity called the Art Museums of Bergen.
**Part of the National Museum of Art, Architecture and Design since 2003.