There is always a good reason to visit the Museum of Fine Arts Boston (MFA). The Museum’s superb holdings of some 450,000 objects are encyclopedic in scope. Nevertheless, three noteworthy temporary exhibitions and gallery reopenings with special loans make this a particularly opportune time to be there. 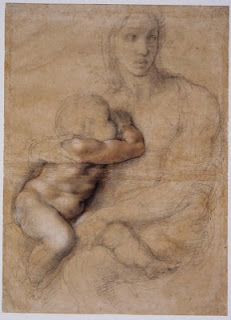 
For a full day, begin with the Michelangelo drawing show: Michelangelo: Sacred and Profane, Master Drawings from the Casa Buonarroti (Gallery 154). This intimate single-room exhibition presents 25 Michelangelo drawings of architectural (14) and figural (11) subjects. This viewer can not recall a larger grouping of the artist’s architectural drawings ever in the US. The exhibition makes obvious why Michelangelo’s drawings were always highly valued. Creative ideas pour forth. Concepts are worked and reworked or left alone as the artist moved on to other interests. Transformations occur through pencil, chalk, wash and ink. 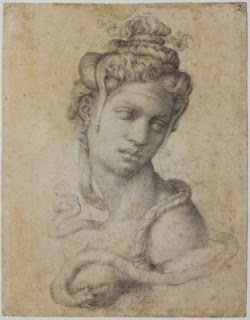 
Some of the artist’s most famous works are here such as his black chalk drawing of Cleopatra. The Egyptian queen is depicted at the moment of the snake's deadly bite to her breast. The drawing was Michelangelo’s gift to his close friend Tommaso de’Cavalieri, a young Roman nobleman. 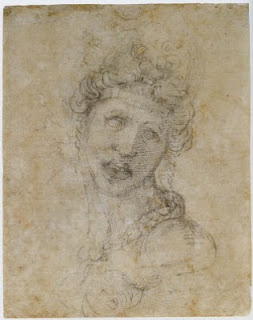 
On the back, the outline of Cleopatra becomes a grotesque female head. This “verso” drawing was uncovered in 1988 when a backing on the paper was removed. Scholars have debated its authorship. The face and shoulder outline appear awkwardly drawn. One cogent theory suggests that Cavalieri drew it. He was the first owner of the work. Michelangelo may have provided drawing lessons to the younger man and one result could have been this unattractive head (see William E. Wallace, The Woman Behind Michelangelo’s Cleopatra, Art News, April, 2013).

The Madonna and Child, another celebrated representation, is nearby. The drawing is a virtual showcase of the artist’s technical range. Black and red chalk, red wash, lead white and ink make the fully realized body of the Christ child seems to pop out of the paper’s surface. The Madonna’s unforgettable subtle expression of sadness and otherworldly gaze movingly implies her son’s future passion.

A lingering look at the Sacrifice of Isaac rendered with black and red chalk along with pen and ink, reveals a lightly sketched ram among thick bushes in the lower left corner. The black chalk Risen Christ makes clear Michelangelo’s experiments with the placement and bend of the figures’s legs. The architectural designs are significant. Several are studies for the unfinished façade of the Church of San Lorenzo (never completed) as well as the Laurentian Library and New Sacristy which were part of the San Lorenzo complex. Michelangelo’s work plainly anticipates the seventeenth-century Baroque architectural style of Bernini and Borromini.


Spend time looking. You may not have the opportunity to see these drawings again. 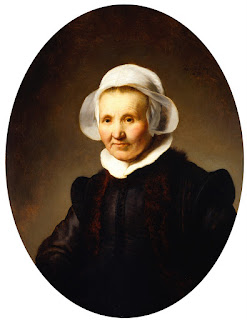 
The Museum’s main Dutch and Flemish gallery (Gallery 242) and neighboring smaller gallery (243) have been reopened this month after an almost year-long renovation. Hung alongside the museum’s own holdings are seventeen paintings from the acclaimed seventeenth-century Dutch and Flemish collection of Rose-Marie and Eijk van Otterloo. The new installation makes a good case for the MFA to be the ultimate recipient of van Otterloo collection. The couple plan to make a decision in the next two years as to the future home of their 70 paintings, 20 pieces of furniture and 10,000 books which had belonged to the eminent Dutch and Flemish art historian Egbert Haverkamp-Bergemann. The van Otterloos want their collection to remain intact. Thus, should they decide against the MFA placement, now is the time to see how their art and the museum’s own mingle in mutual enhancement.


On view is their early Rembrandt, Portrait of Aeltje Uylenburgh. Painted when Aeltje was 62 years old and the artist 26, the work is considered one of Rembrandt's finest paintings in private hands. The sitter’s white starched collar and fur trimmed dress take your breath away.  Saskia van Uylenburgh, a cousin of Aeltje, would soon become the artist’s wife. 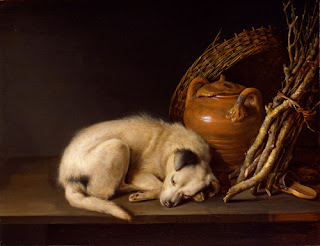 
A favorite of mine is the van Otterloo’s Dog at Rest by Gerrit Dou. The artist was a pupil of Rembrandt and this painting’s canine owes much to an etching by the master. Unlike his teacher’s bravado brushstrokes and thickly applied paint, Dou’s paintings are smooth surfaced. The artist’s hand is not apparent. Dou and his followers are known as the Fijnschilders (fine-painters), a school of painting characterized by highly finished, true-to-life, small- scale work. The Dog at Rest is good example of this style. The texture of all objects are meticulously detailed. The dog’s hair is painted so accurately you can almost feel the fur. 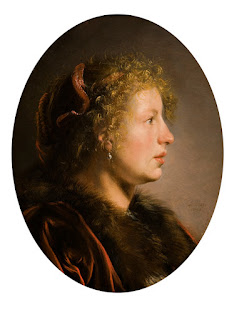 Other van Otterloo paintings include those by Jacob Isaacksz van Ruisdael, Aelbert Cuyp , Jan van der Heyden, Hendrick Avercamp, Jan Baptist Weenix. Willen Claesz Heda and Salomon de Bray. De Bray’s Study of a Young Woman in Profile is particularly valued for seventeenth-century profile portraits are rare. The label explains that the panel was probably a study of a professional model’s head intended for use in other works. The same woman appears in a painting by one of de Bray’s contemporaries.

Although the MFA’s own Dutch and Flemish works merit attention, on this visit plan to concentrate on the van Otterloo loans. The outcome of their bequest is uncertain.

The Triumph of the Winter Queen: Allegory of the Just by Gerrit van Honthorst’s is displayed in the Loring special exhibition gallery (Gallery 276).  The almost 10 feet by 15 feet canvas has been recently conserved.  The 1636 is painting is on loan to the MFA anonymously.  It is a complex iconographic allegory.  Elizabeth Stuart, daughter of James VI and I, King of Scotland, England and Ireland and his wife Anne of Denmark, was nicknamed the "Winter Queen”.   In 1613, Elizabeth married Frederick V, Elector of the Palatinate.  The couple became King and Queen of Bohemia for less than a year (one winter), 1619-20.  They were ousted by the Holy Roman Emperor Ferdinand and took exile in The Hague where Elizabeth remained for the rest of her life.  In 1632, Frederick died.  Elizabeth subsequently commission this large scale work from Honthorst, a leading portrait painter in the Netherlands and abroad.  The painting depicts herself, her husband, and all their children in a setting imbued with symbolic historical and political allusions. The who’s who in the painting and its meanings are explained in a nine-minute film which supplements a series of informative wall texts.  The Hanoverian British monarchs, including the present queen, are Elizabeth Stuart’s descendants. 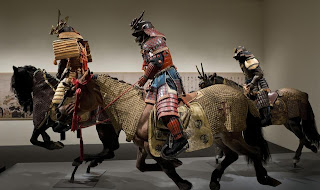 
Samurai!: Armor from the Ann and Gabriel Barbier-Mueller Collection (Gund Gallery LG31) is a splendid exhibit of Japanese arms and armor from one of the world’s most important collections of samurai art. The approximately 14o objects on display make for a very different show than the Metropolitan Museum of Art’s comprehensive samurai exhibition that took place in 2009-2010. The Boston show is smaller, from one collection and focuses on the extreme spectacle of samurai garb and accouterments. Human and horse mannequins make the material come to life. Objects are given ample space to be studied individually, in the round. Yet, the pieces are close enough to one another for visual comparison. These works were made to distinguish rank, wealth and identity. The variety of textures, patterns and symbols astonish. Most are fearsome looking. Some are beautiful. Some are even humorous. All are remarkable.