Do You Know Me? 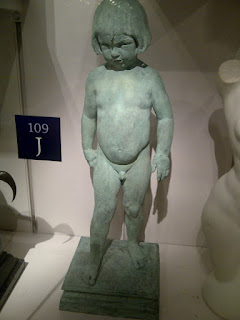 A life-size bronze boy steps forward on the mezzanine level of the Metropolitan Museum of Art’s American Wing. The child is nude. Full-cheeked and pudgy, his cuddly appearance belies a determined look and concentrated gaze. The sculpting is of the highest quality. Joints and digits are well-defined. The formation of each toe is individualized. 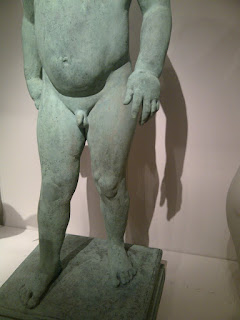 The child’s right arm extends back as if to protect a half-hidden orange clutched in hand. You can almost hear him say, “It’s mine!” As a traditional symbol of purity, the orange may allude to the unsullied innocence of youth. Still, it could simply be the boy’s favorite fruit. Whatever, the orange is the child’s precious possession. The artwork’s specificity yields the impression of a particular person. He seems to be a focused yet playful lad, maybe a bit mischievous.

Who is he?  Take a look at the boy some thirty-four years later. 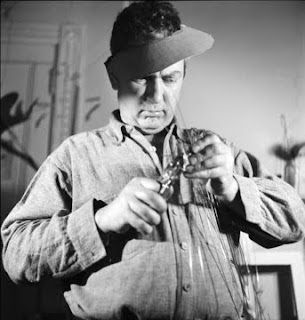 
The bronze statue is a portrait of four-year-old Alexander “Sandy” Calder, the famous American artist acclaimed for his kinetic sculptures called mobiles. It was done by his father, Alexander Stirling Calder, a successful Philadelphian sculptor known for large public projects. Calder called the work, Man Cub. A title that could relate to the barrel-chested child’s resemblance to a little bear. The word cub, however, has an archaic meaning alluding to an undeveloped, uncivilized youth. This usage, according to the Oxford English Dictionary, goes back to 1601, Shakespeare’s Twelfth Night, v.i.167:

O thou dissembling cub! what wilt thou be
When time hath sow’d a grizzle on thy case?


The sculptor was aware no doubt of this connotation. He grew up in the nineteenth century when Shakespeare was part of the popular culture. The Bard’s words and plays were commonly used in secondary education. Youths were compared to young bears who, apocryphally, were thought to be born formless and afterward licked into shape by their mothers. Did not Calder, the father, shape a likeness of his son from an amorphous substance?

The original Man Cub, 1901-1902, was modeled in plaster.  In 1918 the Metropolitan Museum of Art included it in an exhibition of American sculpture and commissioned the artist four years later to cast the work in bronze. Calder made the Museum’s bronze with a distinctive blue-green patina as if had long been exposed to the elements like an object from antiquity.  This finish contrasts with an earlier black and glossy cast completed between 1905 and 1906 in Philadelphia.  No matter the surface variation, the sculpture’s delight with and pride of his offspring is obvious. 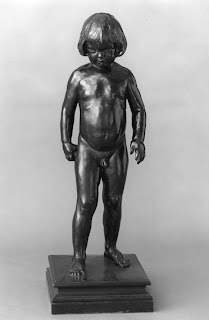 “Sandy” Calder is said to have received his pet name because he looked like Santa Claus. The more likely sobriquet's genesis is the Scottish nickname for Alexander which is Sandy. References to Calder or Alexander Calder generally denote Alexander “Sandy” Calder. More about his work in a future blog.

For those interested, a mobile and necklace by Alexander “Sandy” Calder and another bronze by Alexander Stirling Calder are currently on display in galleries 920, 909 and 768 respectively. The latter artwork is a 1921 foot-high statuette called Scratching Her Heel.  It has the same weathered finish and foundry mark as Man Cub.  Both works were acquired by the Museum in 1922.  From any angle, the statuette has a graceful fluidity.  Don’t overlook it.

*Some words about the Luce Center: this section of the American Wing (Gallery 774) is a visible art storage and study area for works not presently on view in the main galleries. American fine and decorative art objects fill row upon row of glass vitrines. Minimal labeling encourages close observation. Desk top monitors and wall mounted touch-screen panels provide information for further investigation. This area offers a treasury of discoveries as well as a quiet respite from the often congested main Museum venues.