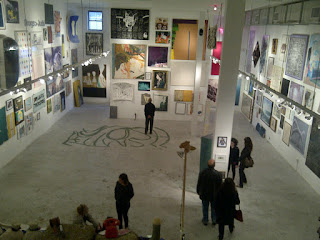 Installation view of Brucennial 2012
Photo: Hillary Ganton
“Harderer. Betterer. Fasterer. Strongerer” are the catchwords of the 2012 Brucennial. It may very well be harder, better, faster and stronger than previous ones. The works of some 400 artists are displayed on four levels of a former theater. Paintings are hung salon style sometimes five or six rows high. Informal, wacky and fun, this multifaceted show makes the Whitney Biennial and New Museum Triennial look over-processed. 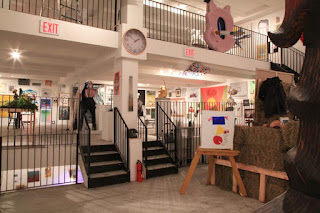 Installation view of Brucennial 2012
Photo: Vito Schnabel Web site
Organized by the art collective Bruce High Quality Foundation which was founded in 2001 by former Cooper Union students and Vito Schnabel, art dealer son of painter Julian Schnabel, the Brucennial is an invigorating take on what is happening now.
The first Brucennial was in 2008 with about 90 artists. Entitled “Doing it Again”, it took place in the Bushwick section of Brooklyn. The location of the following year's installment was the artist Ray Smith’s Gowanus studio. Called “Smithumenta” the show had 80 participants.  Brucennial reached Manhattan in 2010 when over 400 entrants exhibited at a Soho venue. The tag for this last one was “Miseducation”.
2012 is the exhibition's fourth edition. Typical of the Brucennials, unknowns mix with the famous. Works by Damian Hirst, Cindy Sherman and Jean-Michel Basquait are placed alongside those by originators many have not heard of. The overwhelming majority are the latter. 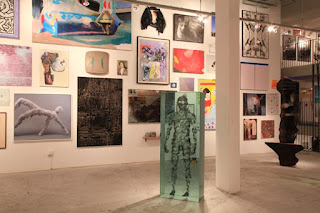 Installation view of Brucennial 2012
Photo: Vito Schnabel Web site
Sculptors, painters, video, installation and other art forms are present. It’s equal-opportunity for all. If not invited, those who wanted to be in the show just needed to ask the Bruce team - most were accepted. Yet, some vetting must have taken place for the good certainly out number the bad.
Penciled or penned names written directly on the walls identify artists. There was one lone business card affixed under a painting that told more. A number of creators were not indicated. On my visit I saw a few gallery checklists, one for each area. These, however, were easily overlooked as if authorship was not that important. It’s the art that matters. 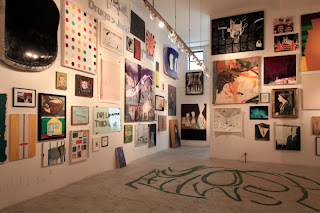 Installation view of Brucennial 2012
Photo: Vito Schnabel Web site
Brucennial 2012 has something for everyone and plenty of room to take it all in. This viewer saw much of merit but won’t comment on any particular work. The fun is seeing the pieces unbiassed and making up one’s own mind.
The works are for sale. Prices are not listed. To find out more, contact the artist.
Is this, as the organizers state, “The single most important art exhibition in the history of the world. Ever.”? Doubtful. Nevertheless, it is democratic, fresh and full of life. The Brucennials appear to be on the right track.
Don’t postpone your visit. The exhibit closes on April 20th.