Louise Bourgeois (American, born France. 1911-2011), Sleeping Figure,
1950, painted balsa wood,
6 ft. 2 1/2 in. x 11 ft. 5/8 x 11 3/4 in. (189.2 x 29.5 x 29.7 cm),
Katharine Cornell Fund.
© 2011 Louise Bourgeois Trust
There is change at the Museum of Modern Art. The installation of the Museum’s peerless permanent collection of modern and contemporary art has been reassessed, bringing back the excitement of discovering the new.
After the closing this past April of the abstract expressionist show, the fourth-floor Alfred H. Barr, Jr. Galleries, usually devoted to the Museum’s collection, were empty. For the first time since her 2008 appointment as chief curator of painting and sculpture, Ann Timken had the chance to completely reinstall the 1940s through contemporary art. The choices she and her five member curatorial team made as well as the modifications to the 1880s to 1940s array on the fifth floor express a break from the past. An open and flexible approach to the history of modernism replaces a dogmatic methodology with the belief that there are many ways to look at the history of modern art as well as the Museum’s collection. Painting, sculpture and objects in other mediums are mixed and those on exhibit alternate regularly. Attention is given to overlooked artists, artworks too long in storage, works by women and international artists. Contemporary art has more space and there is a commitment to increase collecting in this area.
The twelve galleries on the fourth floor, Painting and Sculpture II, have been transformed the most. They are the subject of this post. 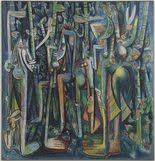 Wilfredo Lam (Cuban, 1902-1982), The Jungle, 1943,
gouache on paper mounted on canvas, 94 1/4 x 90 1/2 in. (239.4 x 229.9 cm),
Inter-American Fund.
© 2011 Artists Rights Society (ARS), New York / ADAGP, Paris
A glance through the entrance into the first fourth-floor gallery (Gallery 15) reveals a difference. A sculpture by a woman leads off. Perhaps, the expected start would have been an iconic painting by some celebrated male painter like Jackson Pollock or Jasper Johns. Instead, Louise Bourgeois’s totemic, phallic-like Sleeping Figure greets visitors. To the right is Wilfredo Lam’s masterpiece, The Jungle. Alongside this hangs the wood and rope sculpture Totem for All Religions by Frederick Kiesler which neighbors André Masson’s canvas, The Kill. These Surrealist works play off each other, enhancing visual experience by illuminating shared characteristics. A woman, a Cuban, an American born in Romania, and a French artist begin the visitor’s visual journey. Dorothea Tanning’s work is also in this gallery making the impact of the female contingent even stronger.
A short digression: the issue of women artists at MoMA has been remarked upon in the past. In the November 18, 2007 New York Magazine article, “Where Are All the Women? On MoMA’s identity politics.”, the art critic Jerry Saltz laments that out of 137 artists presented in the permanent galleries, only 11 were women. I recently counted 24 women artist who had works on view and several were represented by more than one object. 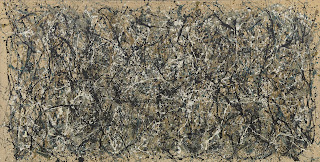 Barnett Newman (American, 1905-1970), Vir Heroicus Sublimis,
1950-51, oil on canvas, 7 ft. 11 3/8 in. x 17 ft. 9 1/4 in. (242.2 x 541.7 cm),
The Museum of Modern Art, New York.
Gift of Mr. and Mrs. Ben Heller
© 2011 Barnett Newman Foundation / Artists Rights Society (ARS), New York
Proceeding sequentially (Gallery 16), brings into sight two large canvases by Barnett Newman which flank a Jackson Pollack. On the room’s other side, a Francis Bacon is set close to a Giacometti portrait. Two sculptures by the latter are also on display. The pairings highlight associations and distinctions. I especially delighted in the comparison between Pollack’s expansive, rhythmic One: Number 31, 1950 and Newman’s calm yet vibrant Vir Heroicus Sublimis. 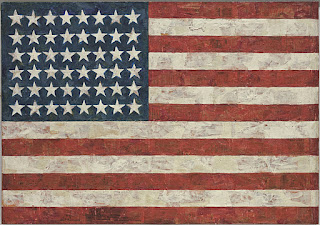 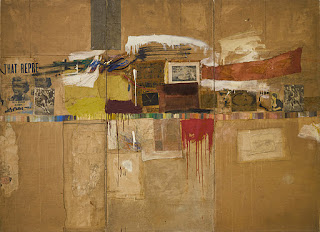 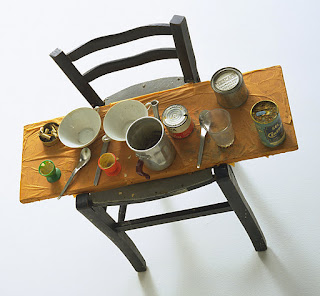 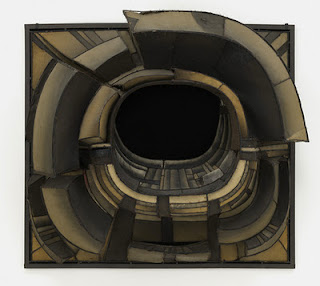 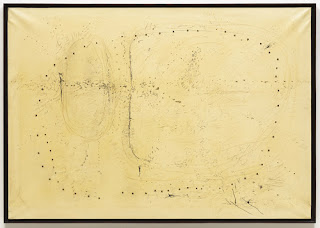 Lucio Fontana (Italian, born Argentina. 1899-1968), Spatial Concept,
1957, ink and pencil on paper on canvas,
55 x 78 7/8 in. (139.7 x 200.4 cm). Gift of Morton G. Neumann.
© 2011 Fondation Lucio Fontana
On my previous MoMA visits in the last few weeks, the Saint Phalle was not on view but a Yayoi Kusama paper work was. The present Villegié had replaced another work by the artist. Exchanges are nice surprises for the frequent visitor. 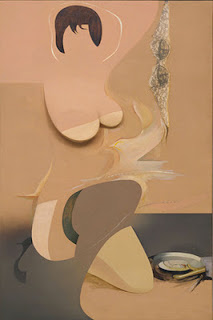 Richard Hamilton, (British,1922-2011), Pin-Up, 1961,
oil, cellulose, and collage on panel,
53 3/4 x 37 3/4 x 3 in. (136.5 x 95.8 x 7.6 cm) including frame,
Enid A. Haupt Fund and an anonymous fund. © 2011 Artists Rights Society (ARS),
New York / DACS, London
A first-rate presentation of 1960s Pop Art (Gallery 19) follows. Star attractions include works by Roy Lichtenstein, Claes Oldenburg, Tom Wesselmann, George Segal, James Rosenquist, and Alex Katz. The installation also has pieces by Richard Hamilton, Michelangelo Pistoletto and Marisol. Hamilton’s 1961 Pin-Up combines different methods. The sex symbol’s bra is an applied photograph and her breasts are both drawn and in concrete relief. At her left knee is a Princess rotary telephone which was the “it” status phone for women in the early 1960s. Designed for use in the bedroom, the phone came in several colors and had a dial that lit up in the dark. Hamilton’s Pin-Up wears nylon hose. Pantyhose, as we know them in the United States, did not become extensively available and worn until the mid-1960s when miniskirts became fashionable. Hose have long been considered more attractive than pantyhose, making sex more accessible. I asked a few twenty year olds if they could identify the phone. Two queried did not recognize it as a telephone; the others that did had never heard of the Princess type. I never got into the hose versus pantyhose interpretation. Meanings, signs and symbols get forgotten over time. 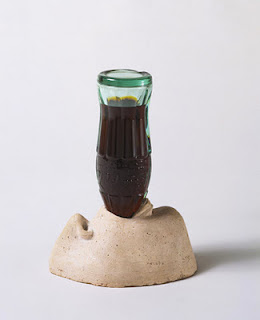 Marisol (Marisol Escobar), (Venezuelan, born France 1930), Love,
1962, plaster and glass (Coca-Cola bottle),
6 1/4 x 4 1/8 x 8 1/8 in. (15.8 x 10.5 x 20.6 cm),
Gift of Claire and Tom Wesselmann. © 2011 Marisol
Although eliciting more humor than eroticism, Marisol’s Love exemplifies an outgoing sexual frankness that this writer finds more apparent in work by women artists. This sculpture was a gift from the artist Tom Wesselmann and his wife Claire. Wesselmann’s 1961 painting, Great American Nude 2, appears high on a near wall. On the other side of the room is James Rosenquist’s Marilyn Monroe I. Rosenquist incorporates an upside down section from the Coca-Cola trademark script linking its iconography to Marisol's sculpture across the gallery space. 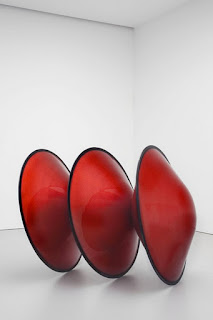 De Wain Valentine, (American, born 1936), Triple Disk Red Metal Flake - Black Edge, 1966,
fiberglass reinforced polyester,
62 x 65 x 85 in. (157.5 x 165.1 x 215.9 cm),
Gift of Marie-Josée and Henry R. Kravis
The simplified forms of Minimalism are met with in the adjoining gallery (Gallery 20). Pieces by Dan Flavin, Donald Judd and the less known Jo Baer, Craig Kauffman and De Wain Valentine clear the mind by their exclusion of pictorial illusionism. Their variety attest to the possibilities even within the movement’s reductive constraints. The red mirror-like surface of Valentine’s 1966 fiberglass, Triple Disk Red Metal Flake - Black Edge, is illustrative. Approached from any side, the three disks have a anthropomorphic quality - touching, dancing, playing. The Valentine came into the collection last year, a gift from Marie-Josée and Henry R. Kravis.
Conceptional art of the late 1960s and early 1970s comes next (Gallery 21). These works move into the immaterial realm of thoughts, language, movement and sound. Sol LeWitt, Robert Smithson, Lawrence Weiner, Robert Barry and Hanne Darboven are here. Visitors most likely will recognize some but not all. Many of these works come from the collection of Seth Siegelaub and were acquired by MoMA this past spring. Siegelaub, curator, dealer and publisher, along with the Conceptional artists he supported questioned the display, ownership, distribution, and selling of art along with the participatory role of art viewers. 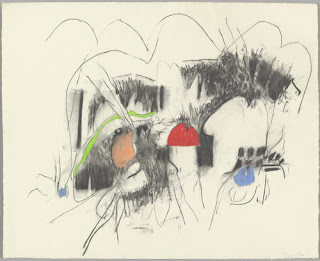 Hannah Wilke, (American, 1940-1993), Untitled, 1963-66,
pastel and charcoal on paper, 19 1/2 x 24 in. (49.5 x 61 cm),
The Judith Rothschild Foundation Contemporary Drawings Collection Gift. © 2011 Marsie, Emanuelle, Damon and Andrew Scharlatt - Hannah Wilke Collection and Archive,
Los Angeles
The art of Hannah Wilke, a sculptor, painter, photographer, video and performance/installation artist is presented in a small side gallery (Gallery 22). Wilke tackled issues of feminism especially female sexuality using her own body to examine women’s physical experience. Her pieces on view includes a 1974 video, Gestures, drawings, photographs and sculpture. Although critically praised, Wilke’s controversial art has not been widely exhibited in museums. MoMa’s commitment is a notable beginning.
A light-filled stairway space (Gallery 26) hosts the diverse works of Agnes Martin, Ellsworth Kelly, Robert Indiana and Jack Youngerman. In the 1950s, these artists lived and worked on Coenties Slip, a street in lower Manhattan where rents were cheap. The gallery, off the Conceptional art area, is easy to miss but should be visited. 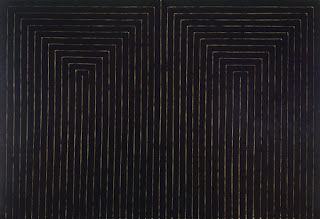 Frank Stella (American, born 1936), The Marriage of Reason and Squalor, II,
1959, enamel on canvas,
7 ft. 6 3/4 in. x 11 ft. 3/4 in. (230.5 x 337.2 cm),
Larry Aldrich Foundation Fund. © 2011 Frank Stella / Artists Rights Society (ARS),  New York
Retracing some steps leads to objects primarily from the late 1960s (Gallery 23). This was a period when artists turned away from Minimalism, concentrating on the process of art, creating with unusual materials such as latex, resin and wax. This space is packed with nine sculptures and one painting. Five works are by women and five by men. The two sculptures by Lynda Benglis, the one by Louise Bourgeois and the two by Eva Hesse appear organic, soft-edged, sexually evocative. The men’s pieces, by Richard Serra, Bruce Nauman, Frank Stella, Joseph Beuys, and Giovanni Anselmo tend to be hard edged, more mindful than sensual. The large 1959 Stella canvas, The Marriage of Reason and Squalor II, is installed alone on the gallery’s end wall. Belonging to the minimalist aesthetic, its repeated concentric inverted U-shapes, devoid any sense of depth, contrasts with the surrounding heterogeneous mixture of three-dimensional forms. 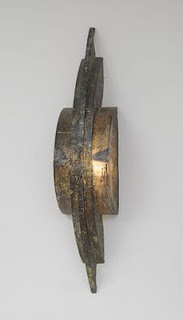 Bruce Nauman, (American, born 1941), Untitled,
1965, fiberglass, polyester resin, and light,
8 ft. 4 in. x 20 ft. x 21 in. (254 x 50.3 x 53.3 cm),
Gift of Joseph Helman. © 2011 Bruce Nauman / Artists Rights Society (ARS), New York
This gallery's sculptures bring to mind notions of maleness and femaleness. Bruce Nauman’s 1965 wall piece could be the male response to Lee Bontecou’s 1961 work in the “assemblage” gallery. The masculine Nauman, more height than breadth, is a closed, vertical protuberant. The softer, feminine Bontecou is rounded and open. One appears to discourage contact; the other reaches out and invites.
Fully-realized Conceptional art is displayed in the neighboring space (Gallery 24). Daniel Buren, Dan Graham On Kawara, Vito Acconci, Niele Toroni and Marcel Broodthaers are represented by pictures, objects and documents. Broodthaers dominates with 22 pieces. Engaging and perplexing, this artist reminds us that there are no easy answers while he examines the interrelationship among art world players - the artist, museum and art market. Everything on view was acquired this year from the Herman and Nicole Daled Collection. The Daleds amassed an extraordinary collection of 1960s and 1970s art. Herman Daled had a fitting appellation for these pieces. He called them “objects of knowledge”.
The last gallery before exiting (Gallery 25) showcases the painter and sculptor Richard Artschwager. His work relates to Pop art, Minimalism and the found object. Focusing on perception and using a variety of mediums, his creations seem an appropriate end to the fourth floor’s exploration.
The Alfred H Barr Painting and Sculpture Galleries II, Fourth Floor
The Museum of Modern Art
11 West 53 Street, Manhattan, New York
Monday, Wednesday and Thursday, 10:30 a.m. to 5:30 p.m.
Saturday and Sunday, 10:30 a.m. to 5:30 p.m.
Friday, 10:30 a.m. to 8 p.m.
(Open until 8:30 p.m. the first Thursday of every month, September–June)
Closed Tuesdays
Closed Thanksgiving Day and Christmas Day
Posted by ArtWithHillary at 7:25 PM

Hi there, just wanted to tell you, I liked this article.
It was helpful. Keep on posting!
Franco