Meanings Beyond Image and Text: Treasures from the Braginsky Collection 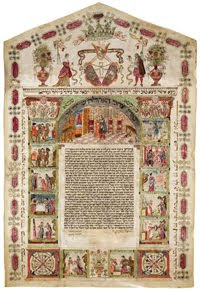 Over 100 rare and unique items are on view in the exhibit, “A Journey through Jewish Worlds: Highlights from the Braginsky Collection of Hebrew Manuscripts and Printed Books” at the Yeshiva University Museum.

The illuminated manuscripts, printed books, marriage contracts, decorated scrolls, liturgical texts and other writings on a variety of subjects come from the Braginsky Collection, one of the most important private collections of this kind in the world. Although René Braginsky has been collecting for the past few decades, this is the first public exhibition devoted exclusively to his collection.

The show is accompanied by an excellent catalogue and Web site, http://www.braginskycollection.com/. The Web site allows viewers to zoom in and out of digital images and texts as well as flip through pages of manuscripts and books or unfurl scrolls. If the object I mention is available online, for easy linkage I have indicated its Web site section and catalogue number.
The works on display cover over six hundred years but the collection is strongest in the seventeenth and eighteenth centuries especially the poster-size illustrated Jewish marriage contracts called ketubbot, (ketubbah in the singular). These elaborate contracts which specified dowries along with the names of the bride and groom reflected the wealth and social standing of the families involved. They also protected women in cases of divorce – what the bride came with was documented and was her due should the marriage cease.

Of note are the ketubbot that were recycled, a practice apparently limited to Italy. Beautifully decorated contracts were reused by either erasing the earlier inscription and rewriting as in the Paduan Ketubbah (Braginsky Collection Web site, Marriage Contracts, Catalogue 70) or entirely replacing the script area as was done for the marriage contract of 1841 from Lugo, Italy which saved a ca. 1775 Watteau-like border (Braginsky Collection Web site, Marriage Contracts, Catalogue 71). Perhaps the rabbinic sumptuary laws that tried to put a lid on the amount spent on weddings encouraged the purchase of earlier contracts which were probably less expensive than commissioning new ones. Whatever, they are not only aesthetically appealing but also import much history.

Some of the more emotionally moving items include a fifteenth-century handwritten Hebrew Bible (Braginsky Collection Web site, Manuscripts and Printed Books, Catalogue 18) that was begun in Spain in 1491 and completed in Portugal in 1494. The scribe, being forced out of Spain after the Jewish expulsion of 1492, finished his work in a country that also drove the Jews out some three years later. This valued bible was taken to Italy and ultimately to Britain where it was purchased by Braginsky. Next to it, is a fifteenth-century Book of Job with Commentary (Braginsky Collection Web site, Manuscripts and Printed Books, Catalogue 17). It was the third Hebrew book published in Naples and attests to the fairly friendly environment Jews experienced in this city at that time. Moreover, on every page there are sixteenth- or seventeenth-century annotations written in Hebrew and Judeo-Persian. These are fascinating notes on the biblical part of the text. 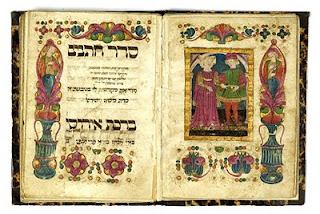 Every work in this exhibition significant. There are illustrated Passover haggadot, (haggadah in the singular), which is the text used during the holiday service celebrating the Jews exodus from Egypt. There are miscellaneous books such as an Italian late sixteenth-century Miscellany for Life Cycle Events (Braginsky Collection Web site, Manuscripts and Printed Books, Catalogue 11) which looks at first glance like a medieval book of hours. There are law, prayer and scientific books as well as noteworthy documents like the ones related to the condemnation and burning of Jewish books in sixteenth-century Italy (Braginsky Collection Web site, Manuscripts and Printed Books, Catalogue 1, 16, 3, 23). One glass showcase across an entire gallery wall contains over 2o Esther scrolls along with some of their elaborate cases made of gold, silver, wood and ivory (Braginsky Collection Web site, Esther Scrolls, Catalogue 98, 99, 103, 104). These scrolls were read during the Purim holiday service and since there were no religious prohibitions against decorating Esther scrolls, they were creatively illustrated. 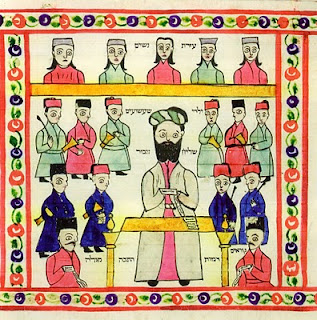 One remarkable Esther scroll from India, c. 1900 (Braginsky Collection Web site, Esther Scrolls, Catalogue 97) shows figures dressed in contemporary and non-western clothes. Men wear fezes, hats associated with the Ottomans, and many females have a bindi, a forehead decoration typically used by Indian women. It is a delightful mix of Indian ornaments and Jewish lore.

The Indian Esther scroll and three other pieces were obtained by Braginsky in the last six months and have never before been available for general viewing. In fact, the recent purchases seen here in New York were not shown in Amsterdam where the exhibit originated. Included in this new group is the earliest known dated decorated Esther Scroll of 1564 from Venice which was written by a woman; a 1668 Circumcision Manual also from Italy which includes the only known representation in Jewish art of Abraham circumcising himself and his son Ishmael; and, a 1755 Diploma for a Jewish Graduate of the University of Padua Medical School. The University of Padua was one of the few European universities that admitted Jews. The Medical School had special diplomas for the Jewish graduates which substituted the phrase, “In the name of God eternal” for the usual “In the name of Christ eternal.”

The Braginsky Collection may not have the breadth and depth of the acclaimed Valmadonna Trust Library of Hebrew books and manuscripts, which was on exhibit at Sotheby’s New York galleries in 2009, but the collection’s quality and merit make it nonpareil.

A Journey through Jewish Worlds:
Highlights from the Braginsky Collection
of Hebrew Manuscripts and Printed Books
Yeshiva University Museum at the Center for Jewish History
15 West 16th Street, Manhattan
Sunday, Tuesday and Thursday 11 AM - 5 PM
Monday 3:30 - 8 PM
Wednesday 11 AM - 8 PM
Friday 11 AM - 2:30 PM
Through August 1, 2010
Posted by ArtWithHillary at 1:47 PM