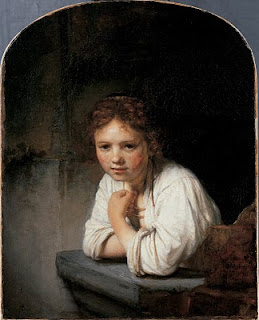 Rembrandt van Rijn, A Girl at a Window, 1645, oil on canvas,
32.1 x 26 in. (81.6 x 66.0 cm), Dulwich Picture Gallery, London
Bourgeois Bequest, 1811
© The Trustees of Dulwich Picture Gallery
Masterpieces of European Painting from Dulwich Picture Gallery, the exhibition at the Frick Collection,is a gift to all those who respond to picture making at its highest level. Nine important seventeenth- and eighteenth-century paintings from the Dulwich’s renowned European painting collection are displayed in the Frick’s Oval Room and Garden Court. The Dulwich Picture Gallery, located in London, was the first public art gallery in England. Since its holdings do not often travel, this show is a special treat introducing audiences to works of art that may not be familiar. It joins a group of remarkable small exhibits the Frick has mounted from collections relatively unknown here.

The visiting paintings have received well-deserved praise in such informative reviews as “Dreamy Fantasies of Femininity and Nature” by Ken Johnson, The New York Times, and “Fresh Faces in the Family” by Lance Esplund, The Wall Street Journal. Much can be said about each paintings but I comment only on a few of the aspects that partiuclarly attracted me.

The star of the show is Rembrandt’s “Girl at a Window”, placed immediately at the entrance of the Oval Room as you approach it from the Court Garden. She brings to mind other seductive visiting beauties who in past shows occupied this central position – Parmigianino’s “Antea” from the Museo di Capodimonte, Naples, in 2008 and in 2005, Rapahel’s “Fornarina” from National Gallery of Art at the Palazzo Barberini, Rome.

The "Girl at the Window" probably depicts a type or figure study rather than a specific individual. Nevertheless, she comes across as real – someone who may speak at any moment. Rembrandt’s masterly painting technique brings her life exquisitely rendering her florid cheeks, the slight tan of her left hand and lower arm and the tiny bug bites on both arms. Marvelous is the way paint describes her gold necklace, the shadowed fingers playing with this ornament and the rope-like decoration on her white blouse. She is at once absorbed in the painting and projected out of it.

In the Garden courtyard, on either side of the Oval Room entranceway, are two delightful eighteenth-century paintings: Canaletto’s “Old Walton Bridge”, and Watteau’s “Les Plaisirs du bal (Pleasures of the Dance)”. Of comparative easel size, these works invite comparison. Numerous characters narrate and animate the scenes. Especially delightful are the images of dogs: the foreground dog in the Canaletto and the four canines in the Watteau. 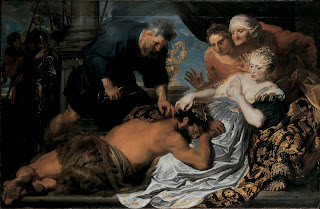 Sir Anthony Van Dyck’s “Samson and Delilah” and Sir Peter Lely’s “Nymphs by a Fountain”, two of my favorite works, are displayed across from each other in the Oval Room. 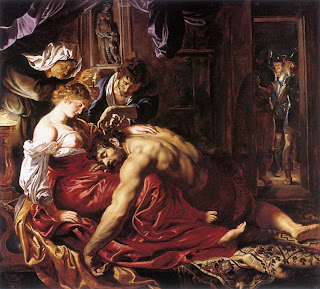 Peter Paul Rubens, Samson and Delilah, c. 1609-1610,
oil on wood,72.8 x 80.7 in. (185 x 205 cm),
The National Gallery, London
Van Dyck’s Samson is an early work by the artist inspired by Sir Peter Paul Rubens’s painting of the same subject. The artist had worked with Rubens and most likely knew the Rubens's Samson painting as well as an engraving of it by Jacob Matham.

Jacob Matham, Samson and Delilah, c. 1613, copper engraving,
14 x 17 in. (380 x 440 mm), Rockox House, Antwerp
Such reproductive engraving as Matham’s made works of art available to a wider public. Matham excelled in this medium. His detailed engraving of the Rubens’s Samson was completed just a few years after the painting was finished. Van Dyck most likely worked from the Matham print since the Van Dyck reverses Rubens’s composition as seen in the print. (Using the engraving technique, paper is pressed into the inked incised lines of the engraver’s plate reproducing the recorded image in reverse.)