Damaged But Not Diminished 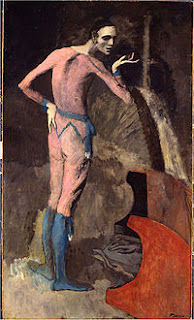 Last month an accident to an important Picasso painting, The Actor, in the Metropolitan Museum of Art of New York, brought attention to works of art that have been damaged. In the case of the Picasso, a visitor fell against the work causing a six-inch vertical gash in the lower right part of the approximately six by four foot canvas. Most likely, the tear will be difficult to detect once repaired. (See Vogel, Carol, “Questions Over Fixing Torn Picasso, New York Times on the Web, 25 January 2010, Art & Design.)

Is the painting diminished? I think not. The mishap will become a somewhat amusing but cautionary addition to the painting’s history. In a way, the incident fits the interpretation of the painting’s subject.

The work is from Picasso’s romantic Rose Period and depicts a slender acrobat. It was created at the time circus performers were equated with artists. They were marginalized by society, martyrs to their art - victims of mistreatment.

In a similar manner, we can now look at the painting in the Metropolitan Museum as an object that was a victim of a society that was heedless of its protection. The work becomes a momento mori. The occurrance reminds things happen with age whether natural or random. After all, The Actor is over one hundred years old. 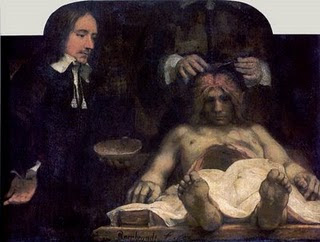 Rembrandt van Rijn, The Anatomy Lesson of Dr. Jan Deyman, 1656,
oil on canvas, cut down to 39.4 x 52.8 in. (100 x 134 cm),
Amsterdam, Amsterdams Historish Museum
A well-known example of an art work that has been marred by misfortune is Rembrandt’s 1656 The Anatomy Lesson of Dr. Jan Deyman. Most of the canvas was destroyed by fire in 1723, leaving only a small section of the central area. But what remains is a powerhouse of conciseness. Painted during the highly prosperous age of the Dutch Republic, this group portrait is a startling realization of interior thought overlaid with moral implication.

The seventeenth-century Dutch had developed numerous professional organizations and lots of civic groups that commissioned portraits of their leaders and members for meeting rooms. Portraiture became the most popular and well-paid artistic category of the period. In this genre as in others, Rembrandt departed from tradition. He did not depict static representations where sitters are lined up one next to the other in unmoving compositions. His portraits have action and meaning far more then faithful representation of those portrayed. 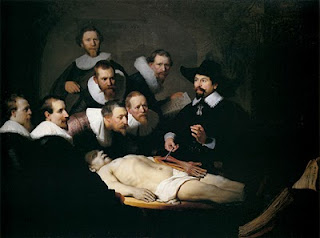 The Anatomy Lesson of Dr. Tulp, 1632, oil on canvas,
66.7 x 85.2 in. (169.5 x 216.5 cm), Mauritshuis, The Hague
The Dr. Deyman was his second anatomy scene. In 1632, he had painted The Anatomy Lesson of Dr. Tulp, where he dramatically turned the subject into a lesson on mortality, divinity and knowledge. (For an excellent analysis of both anatomy group portraits and more, see Simon Schama’s Rembrandt’s Eyes, New York: Alfred A. Knopf, 1999.)

In what is left of the Dr. Deyman work, we see the surgeon’s hands dissecting the cadaver’s brain. His assistant on the left, shown with a thoughtful gaze, holds the corpse's skullcap. The quite foreshortened corpse is so angled that the viewer has a first hand view into the open stomach cavity. What is one to make of this? 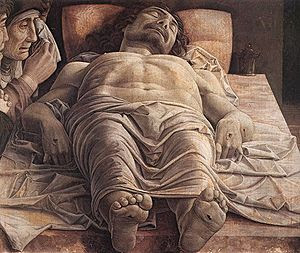 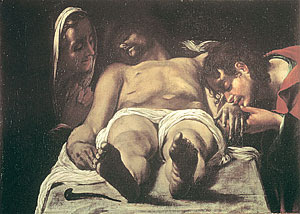 Rembrandt turned the secular event, the autopsy, into something sacred by making reference to these earlier images. The painting is interpreted as a religious scene. Dr. Deyman hands make a gesture of blessing over the dead while his nearby assistant holds the Eucharistic chalice.

The viewer focuses on the central figures of the canvas that fortunately have survived. The cadaver’s extreme backward and forward extension in pictorial space and the placement of the dissecting table against the outermost front of the picture plane, persuade, as in the Mantegna, that the feet of the deceased extend into real space beyond the picture frame. The viewer is thus present in the image and participates in the event.

Surely this painting is not diminished.
Posted by ArtWithHillary at 7:31 AM