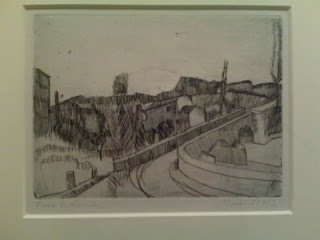 The Bridge Over the Savena in Bologna,1912, Etching, Estorick Collection, London 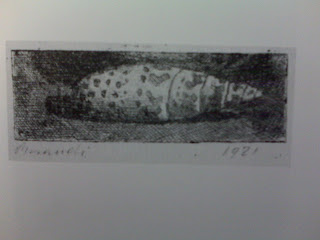 
I suggest you begin your Morandi New York voyage at the Casa Italiana Zerilli-Marimò New York University. Here you can see in a small, quiet setting some twenty-three extraordinary prints. Although the lighting is low, due to conservation concerns, the prints are hung at eye level on plain walls and no large isolating vitrines to intervene between you and the image. Get out your magnifying glasses if you want and indulge in Morandi’s rich cross hatching, variety of tones, dark lines that appear to quiver in their formation. Visualize the etching process and the hard work Morandi put into his print making. Imagine the depth of the grooves cut into the metal plate, the ink that filled them and how the damp paper was pressed into the grooves by the print press’s cylindrical rollers, the damp paper picking up the ink – the deeper the groove the more ink accumulated, the darker the line. Four of the etchings are from an Italian private collection, the rest are from the Estorick Collection, a permanent collection in London devoted to modern Italian art. Morandi taught himself printmaking and became a professor of etching in 1930 at the Bologna Academy of Fine Arts. It is reported he wanted to teach etching technique like Rembrandt, considered the greatest print maker of all times. At the Casa Italiana is exhibited an artist proof of his first print, The Bridge Over the Savena in Bologna, 1912. At this early date Morandi has mastery of the medium – note the subtle tones in the sky. Three other impressions of this print can be seen respectively at Pace Master Prints, Lucas Schoormans Gallery and the Metropolitan Museum of Art. In fact, you will be able to recognize different impressions of the same image at different Morandi New York shows. Look at the etchining Still life with Coffee Pot, 1933, Private Collection, exhibited at the Casa Italiana and compare to the impression at the Metropolitan Museum of Art's Morandi retrospective that belongs to New York's Museum of Modern Art. It would be illuminating to see the impressions side by side and note any changes in press pressure or inking that Morandi may have made or changes due to worn out areas of the plate. The later is less likely since Morandi prints are usually in small editions (even if he pulled or printed the full run – the full intended amount of impressions). At the Casa Italiana, approximately half the prints are landscapes and half still lifes. As far as influences, Rembrandt strongly comes through in the wonderful etching Shell, 1921, Estorick Collection, London. The etching of the beautifully formed shell emerging from the dark background like a body, reminded me of the nude back of in Rembrandt’s 1658 print, the Reclining Woman. Of course, Morandi may have known Rembrandt’s gorgeous Shell print of 1650. Or, Morandi may have been familiar with the shells of the prolific printmaker, Wenceslaus Hollar (1607-1677) who, possibly predating Rembrandt’s Shell print, published probably in the 1640's, a set of 38 shells . In fact, the markings of Morandi’s shell look more like one in Hollar’s set. Be that as it may, influences can be interesting and may lead to introductions to some wonderful artists and their work.

Now on to the Italian Cultural Institute of New York. Here, on the second floor you will find two walls of the outer area devoted to Morandi’s drawings and adjoining this space, a separate room with drawings mixed with a few watercolors. One watercolor here is a 1960 Still Life from a Private Collection borders on pure abstraction. Forms appear and disappear like apparitions. They float as if in another world like Mark Rothko’s rectangles and some Chinese paintings. They convey through color and tone, diverse moods and feelings. The watercolors are all from private collections and half of the drawings are from the Estorick Collection in London. The 1944 Still Life pencil drawing, Estorick Collection, London, outlines the vessels and design of Morandi’s famous etching Natura morta di vasi su un tavola,1931, impressions of which you will see at Pace Master Prints and Lucas Schoormans Gallery – it is also the same vases seen in the 1931 etching Natura morta a grandi segni, impressions of which you will also see in the same gallery exhibits as well the Metropolitan Museum of Art. The beautiful pencil drawing here was done some ten plus years after the prints. Perhaps, Morandi had an impression of the print and traced it. Whatever, it is a wonderful study of relationships and an example of Morandi’s ability to animate the inanimate and to rethink old themes and compositions and come up with something new. Try to keep this drawing in mind when you see the etchings. The somewhat dim light in the high ceiling rooms of the Italian Cultural Institute made viewing a bit difficult. One always wishes for more light with Moandi. Since over half the exhibited works are from private collections, there is a bit of a hodgepodge of frames that detract from the works. It makes you appreciate viewing a Morandi in the simplest frame possible. Gold leaf only distracts from these works. However, the quiet of the Italian Cultural Institute is much appreciated and very conducive to spending time with Morandi's achievements.

The next stop on your tour should be the Pace Master Prints where some twenty plus well-lit images are hung against terra cotta painted walls invoking the bricks of Bologna. You will find here an impression of the early Rembrandt-like still life of a piece of bread with a lemon (Natura morta con pane e limone) of 1921 among some beautiful landscape and still lifes. I assume owing to the nature of private collections from which almost all these etchings come from, there is again a variety of frames – the simple black frames, I think, are best. This exhibit is easily viewed and classy. You can never expect less from a Pace show.

You are well prepared to move on to the Metropolitan Museum of Art’s major Morandi exhibit which is the first Morandi retrospective in this county and brings together over 110 works that include paintings, watercolors and etchings. You are able to track the artist’s development and influences and see how he worked out problems in different mediums and how the solutions in one medium relate to the solutions in another. There are also delightful juxtapositions such as the two similar paintings of the house in the hills of Grizzano one of 1927 and one of 1928; one of the late afternoon or evening sun and one of the late mornoing sun. The exhibit is one of the finest surveys I have ever seen. There are amazing works here and even though there is much to see, you never feel visually tired. My only peeve with the show is the close quarters of the Lehman Pavilion ground floor corridors, now with walls of blue-gray and beige fabric or blue-gray paint, where the retrospective takes place. I would have liked to have more space so the paintings and works on paper have room to breathe and resonate. Morandi’s painting size may be small, but they are big paintings. Also, the 11 matted and framed etchings in the show are placed in two large glass cases flanking the exit opening to the cafeteria that make close viewing impossible. Two of the etchings, including an impression of Still Life with Coffee Pot of 1933 as mentioned earlier, are from New York’s Museum of Modern Art (whose plain dark frames and white matts show off the prints well) and one curious small, horizontal Dutch-like landscape, Paesaggio, 1923, framed like an old master work, came to the museum as a bequest of William S. Lieberman, who was the Museum’s Chairman of 20th Century Art and had been the first curator of the Department of Prints at the Museum of Modern Art. I can see why Lieberman was attracted to this little masterpiece. I also loved to see the blown up photographs of Morandi and his studio. His unframed paintings on the walls as well as, what appears to be, framed prints – possibly for further study. Two or more hours can easily pass swiftly viewing all that is here. It is a feast for the eyes. You will leave full but not heavy. And, you will feel enriched.


To see how Morandi is best seen, go to the Lucas Schoormans Gallery. In this light-filled space, on two floors, you will see Morandi given the area he deserves and the works will take on a depth and richness not apparent when the works are hung closer together. The paintings are more intimate in their relationship to you and to the other works in the room. It was the Lucas Schoormanns Gallery that gave New York the miraculous Giorgio Morandi Late Painting exhibit in 2004. It will be remembered forever in those that saw it. Today we can see in the main gallery area incredible paintings, two of which have never been on public view. In the next room is a watercolor that appears to dissolve and form before our eyes and on view in the upstairs space are etchings and drawings. You will recognize some friends in the etchings but, although you have seen impressions of the same composition before, you can truly see the work here due to the lighting, matting, framing and placement on the walls. This is a beautiful exhibit to be cherished.


Last, almost as special petit fours given after a five course exceptional meal, visit the Sperone Westwater Gallery where there is a group show, spread out over several rooms, entitled “Sculpting Time”. Here are five Morandi oils from the forties and fifties. The last holds four of his paintings and is a fitting end to a Morandi viewing in New York. Have fun.
Posted by ArtWithHillary at 8:27 AM